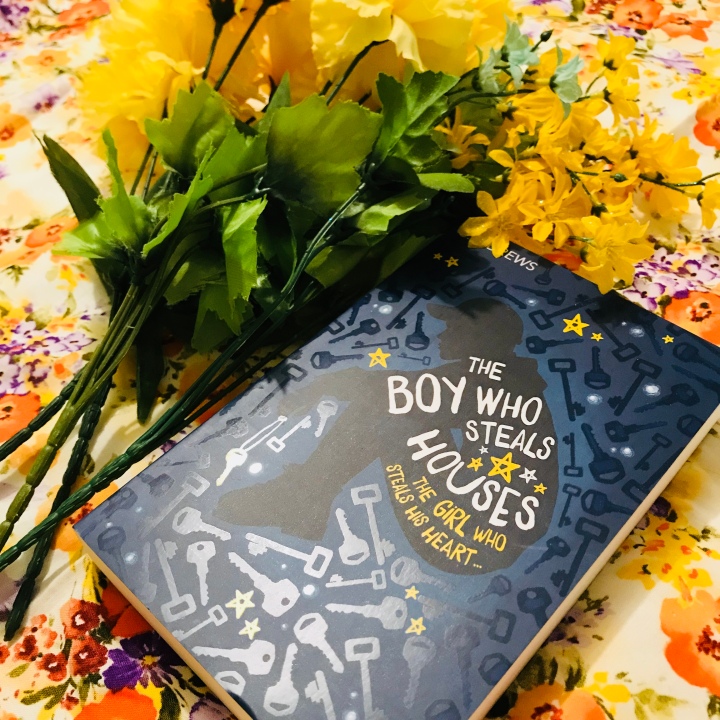 Okay so I’m sure it’s not a secret that I ADORE Cait / CG Drew’s / Paperfury, and her debut novel A Thousand Perfect Notes last year still haunts me now. Because it does, it haunts me in the BEST of ways. So naturally I preordered her second book too, The Boy Who Steals Houses.

This book also started with a sad boy who needs hugs and to be LESS tortured Cait, not more. But from the get-go you’re intrigued, because going into it I knew Sam was stealing houses, if you couldn’t tell. But he’s such a soft and wonderful child who just has had the WORST of luck and deserves so much better than he’s got so far. He’s sweet and kind and funny, and tortured, and malnourished, and mistreated, and misunderstood. Lots of traits I know. But he’s all of this and then some.

This book made me WANT to finish it. I needed to know his secret of why he ran away from home. I needed to know he’d be okay. Because I honestly was just afraid he was going to die and I needed him to live. I honestly thought he died at least three times. Or I feared he’d get caught and get shoved in jail… and die.

Okay so, I am ALL for Cait’s style of writing. In this book and in ATPN she just writes beautifully and yes I mean it’s pretty to look at because I’m hella vain and I like pretty things. Like look at this!!

And you just get your heart to jump if only slightly when you get to these parts. Because it just

You can envision it like a clip of a film. And it’s absolute magic.

Aside from Sam, because obviously the child just needs hugs, food and a nap that lasts fifty days. The other characters are amazing. Avery is his older brother and he’s autistic and he’s hilarious. And again… NEEDS HUGS, NAPS, AND FOOD people. These boys are starved. Feed them Cait…FEED them. Not torture.

There’s also the entire De Lainey clan and I loved Moxie she’s amazing and skilled and she gets her brothers to get life going. Which we all need.

Plus Mr. De Lainey is just the greatest adult figure in this book, yes, yes I know there’s literally like three but he’s still the best. He’s so tired and over-worked and the man needs a nap. But he’s trying so hard! He’s trying so freaking hard to  keep it together and to make sure his kids are okay, and he deserves love because this man keeps his home open to all of these kids that his kids *I MEAN JEREMY, cus he’s popular* keep bringing into his home. So yeah, they may be struggle-busing it but he’s not mean and he sure as hell doesn’t turn anyone away.

I’m literally a sucker for a good family story and I think that this book is definitely one of my favorites so far when it comes to that. The De Lainey clan is rambunctious and loud, and hilarious. They love each other, they tease each other, they’re golden.

The Lou brothers are caring, and angry but ultimately always there for one another.  Which is more than needed in life. Even when you laugh at your brother for being covered in buckets of glitter for all eternity. You know, at the end of the day, you’ll be there for each other forever.

Seriously this book was just so good to read, and very worth every minute. It was sad, it was funny, and I honestly MUST ask…have you guys read it? If so what’d you think of it? Please share your thoughts.

Would you rather re-read books you love for a year or watch movie adaptations of books for a year but not be able to read the books they're based on?
Please enjoy more delayed content as I make my way back to my family for a bit. ❤
"You want to know something funny?" he asked. "In a choice between staying here and going home, I'd still choose here. With you."
Can't stop won't stop. I love Perxy Jackson, it's one of my obsession series and it has SO much to do with the myths and the characters. Rick Riordan is absolutely incredible in my opinion and I think it's why this series randomly haunts my thoughts.
Long time no see, how ya been?
❤️📚❤️